A Tale of Three Reps: Data-Driven Sales Management in Action

Sales managers are the key to improving rep performance, yet they are consistently under-trained and ill-equipped to coach and develop their teams. According to Gartner Research, only 40 percent of sales reps report working in an organization with a well-established coaching culture and managers only spend 10 percent of their time coaching. To us, that’s a problem!

Most of what passes for manager coaching is actually deal inspection and asking reps when a deal is going to be made. It’s not their fault, because:

Of course, we're fans of data-driven sales management and use it religiously in onboarding, coaching, and developing our AEs, SDRs, and CSMs. Here are three examples of how Pete, our CRO, uses data to coach his reps.

Stuck at the Start

In this situation, we had a sales rep who had a “soft month.” In other words, the rep was hitting below average on the number of deals closed.

So we jumped into Atrium and took a look at this rep’s dashboard to determine which metrics were not the issue. We found that opportunity inflow was fine, but the opps were not advancing beyond the discovery stage.

We began monitoring early-stage opp progression to catch this potential issue down the line. From there, we set a goal to hit a certain number of opps and move those opps beyond discovery and into disco—also known as the sales-accepted stage.

So our rep’s “soft month” remained just that, rather than becoming a problem. But the main point here is the importance of using a program that allows you to see all key performance indicators (KPIs) in one dashboard. From this dashboard, you can determine which KPIs are steady and which are causing issues.

Trouble in the Funnel 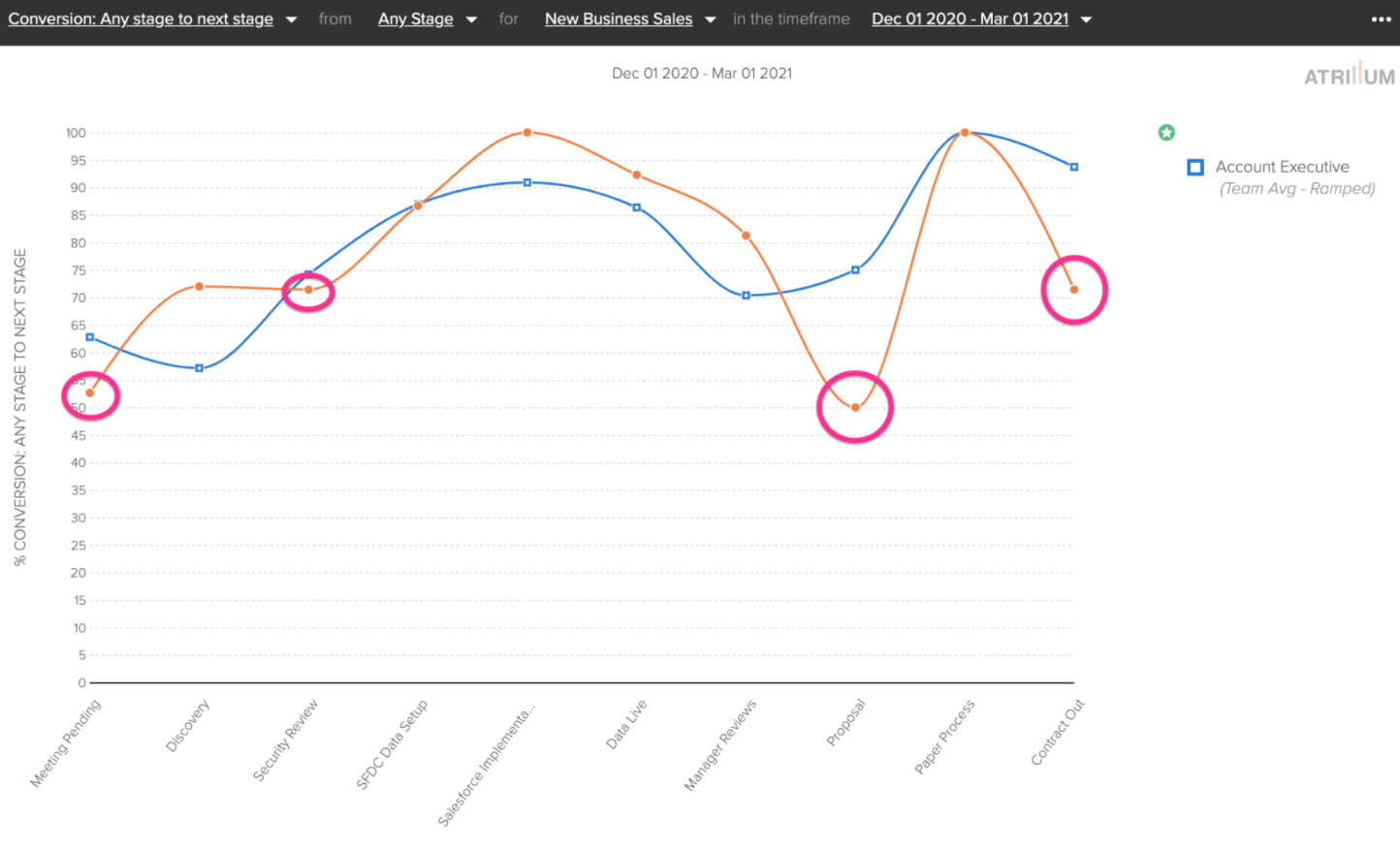 To help this rep out, we put together two coaching strategies:

The first strategy gave the rep more control over the sales process by holding customers accountable for their commitments, ensuring there were next steps on the calendar, and multithreading with contacts.

By focusing on specific performance issues, these strategies boosted the rep’s conversion rate to an above-average level and achieved far more pipeline moving down the funnel.

This rep needed to improve their call and closing behaviors to drive deals. Our data-driven sales coaching strategy focused on two areas:

With these strategies, the rep closed significantly more deals. Using our integration with the call recording software Gong, we found that their talk ratio dropped down from 60 to 50 percent, which was better than the team ratio.

Use Data to Guide the Who, What, and How of Rep Coaching

Sales management isn’t just about deal reviews. It’s also about the coaching that goes into improving your team’s performance.

With a data-driven sales management platform, such as Atrium, you can use the data collected from your set metrics to identify poor performance and coach for improved behaviors and increased bookings, just like we have done with our own sales reps.

Ready to get a better handle on your sales data? Start by downloading our guide, Rep Metrics Inspection & Diagnosis.

Use data to unlock the performance of your team.

Why We Built Atrium
Read