Chris Geraci is Head of Strategic Sales at 15Five, a performance management platform with over $94m in funding to-date. Founded in 2011, 15Five aims to elevate the employee and management experience, providing solutions from engagement surveys and 1-on-1 tools to performance reviews and OKRs.

Chris joined 15Five after a nearly 5 year run with a well-funded, high-growth company. In his previous role, Chris had access to a ton of resources, including a robust sales ops team that provided him with extensive data and insights around his team’s performance.

Because he joined 15Five in its earlier stages, Chris didn’t have access to the same resources when he was tasked with building out his sales team. As the company grew, he needed another way to monitor, coach, and scale his teams without a sales ops team providing analytical support - enter Atrium.

Chris saw value immediately upon implementation. Not only was Atrium able to provide impactful strategy insights right away, but he was able to set it up at a fraction of the cost and time that it would have taken him to complete on his own.

When meeting with his CFO to justify renewing his Atrium license for him and his teams, Chris was able to provide tangible ROI value, showing how Atrium saved their resourced-strapped RevOps teams both time and effort.

The Challenge That 15Five Faced

When Chris transitioned into his role at 15Five, the responsibilities of the non-existent sales ops analyst fell completely to him. Chris spent countless hours building Salesforce dashboards (and trying to teach himself SQL), only to be left with surface-level data that was nowhere near the quality of insights that he needed to lead his team.

One of Chris’ philosophies as a sales manager is that he wants his sales reps to own their pipeline like it’s their business. When Chris reached out to Atrium, the original value that he saw was the product allowed him the ability to scale that mindset across the organization as 15Five grew. Atrium gave Chris not just intelligent insights, but the ability to teach first-time managers how to be great and teach reps how to run their own business.

After working with Atrium’s integration team to get rolling, Chris was able to build his core dashboards in less than one day, and then scale up and down across the team in less than two hours. Chris estimates that a manual output with the same level of detail would have taken him him and a Sales Ops person over 3 months to complete.

After implementing Atrium and setting up all of the dashboards and metrics Chris needed for his team, he was able to take immediate action based on the insights and alerts provided by Atrium. Chris utilizes Atrium to monitor the ramp of his new reps, coach to specific issues to improve performance, monitor and track progress towards both quota and improvement goals, and ultimately turn his reps into rockstars that think like CROs and own their business.

Overall, Chris’ team saw a significant improvement in multiple key areas as a result of using Atrium. Chris was able to utilize Atrium to focus on improving pipeline hygiene, which has led to a nearly 20% decrease in opportunities ending in close-lost or being pushed to the next quarter YOY. Chris was able to use insights from Atrium to coach his team to a 38% increase in win rates YOY, and a 182% increase in ASP YOY. 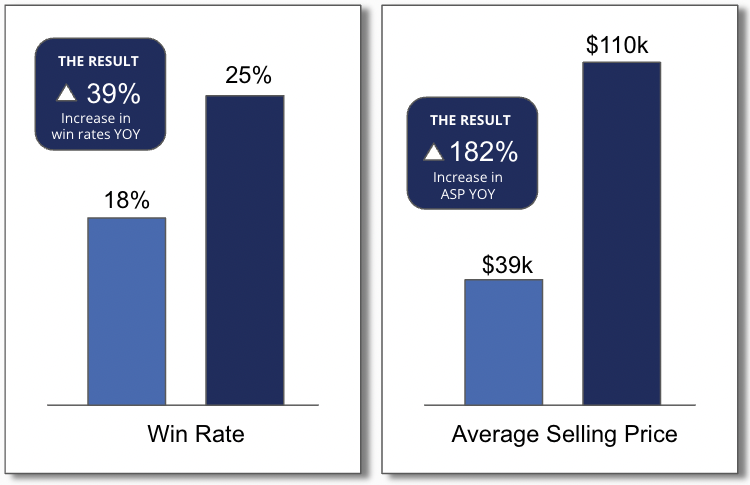 Ensuring a Successful Ramp with Atrium

One of Chris’ primary uses in Atrium is to monitor and ensure successful ramp. When Chris’ rep Brett joined the team, he was coming into his first ever closing role. In addition to monitoring things like bookings, meetings on calendar, and opps owned, Chris focused specifically on Opps Advanced.

Chris also set up distributions for Opps Advanced, Opp Health, and Accounts Touched in Atrium so that he was able to regularly share progress across the management team and check in on Brett’s progress as he ramped, jumping in to coach when necessary.

Today, Chris credits Brett’s 24% more Opps Advanced than his peers to taking the ramping dashboard in Atrium and coaching to specific metrics. As a result, Brett has nearly 2x higher bookings than his peers, and became fully ramped faster than anyone else on the team. Brett is on track to get promoted in the next quarter, which is the fastest promotional cycle Chris has seen in that role.

Coaching Reps from Underperforming to Overachieving

Chris also leverages Atrium to coach his underperforming reps to be quota-crushing superstars. For example, in Q3 of 2020, Chris rep’ Kathy was ranked 9th out of the 15 reps on the team. With Atrium, Chris was able to pinpoint where Kathy was struggling the most. He found that she had the lowest conversion rate on the team at the Value & Solutions stage of their funnel.

Together, Chris and Kathy were able to come up with a plan for her to improve, focusing heavily on converting from that stage. Chris coached Kathy through the process of understanding and validating that 15Five is the right choice for her prospects’ business. Chris was then able to track her progress using Atrium, and was able to easily see that as she improved, the curve on the Conversions From Stage card in Atrium flattened out.

With the help of Atrium, Chris’ coaching, and Kathy’s hard work and focus, she is currently the #2 rep on the team. She recently closed the two largest two transactions in company history, including the biggest deals to-date for two separate product offerings. Kathy has a 73% conversion rate from the value and solution stage (the highest on the team), and now has one of the flattest curves on the team.

While the credit ultimately goes to Kathy for putting in the work, Chris was able to identify the issue, provide specific and actionable coaching, and monitor her improvement over time, all using Atrium.

Two of Chris’ biggest focuses for his team in the last 24 months have been improving their win rate and moving 15Five up-market. To accomplish this, Chris used Atrium to continually monitor pipeline hygiene and ensure his team was spending their time efficiently. In rep 1:1s, Chris leveraged Atrium data to coach around getting deals out of the pipeline that weren’t moving, and instead focus on opportunities that had movement and potential. As a result, Chris’ team’s win rate has increased from 18% to 25% in the last 18 months.

Chris also saw his team’s ASP increase 3x in the last 24 months. This can be attributed partially to 15Five’s increased product offering, but Chris also credits Atrium in helping him to push up-market. Previously, 15Five was a traditional SMB business trying to get into the mid-market and enterprise segments. Just 18 months ago, the majority of his team was working in the lower/mid-market. Today, his entire team regularly works and closes enterprise deals, with their ASP increasing from $39k to $110k YOY.

At 15Five, Atrium not only drives results with reps, it teaches first-time managers how to manage said reps. With Atrium, new managers don’t have to rely on a sales ops analyst and they don’t have to dig around and try with no avail to figure out what metrics are important to track. Chris is able to get his new managers set up with their team’s data on Atrium in less than 10 minutes so they can self-explore within their already-set-up data. The product then alerts managers of both positive and negative trends, so they’re able to provide kudos or coaching when necessary.

Chris said that one of his favorite things about Atrium from a manager standpoint is that it automates the micromanagement pieces of managing a sales team. Normally Chris would have to go through Salesforce to provide this level of detail for his managers, but with Atrium, he can replicate these metrics and dashboards across 4 teams, 4 managers, and over 30 reps in half the time.

Many reps don’t have experience with trend data. When Chris or his leadership asks, “What are your YoY growth metrics?” they often don’t have the tools of experience to answer those types of questions. Atrium empowers reps to own their book of business like they are VP of Sales or a CRO. Using Atrium, they can easily answer questions like, “How is growth compared to last quarter from a bookings standpoint. What about a pipeline trend standpoint?” Atrium gives these reps the ability to understand and communicate how their business impacts overall business objectives so that everyone in the org is working towards the same revenue goals.

Finally, Atrium helps to align stakeholders across the entire org for things like QBRs, board meetings, all-hands meetings, and more. Whether its an AE, sales manager, VP of Sales, or a CRO, everyone is speaking the same language, talking about the same metrics, the same trends, and the same data. 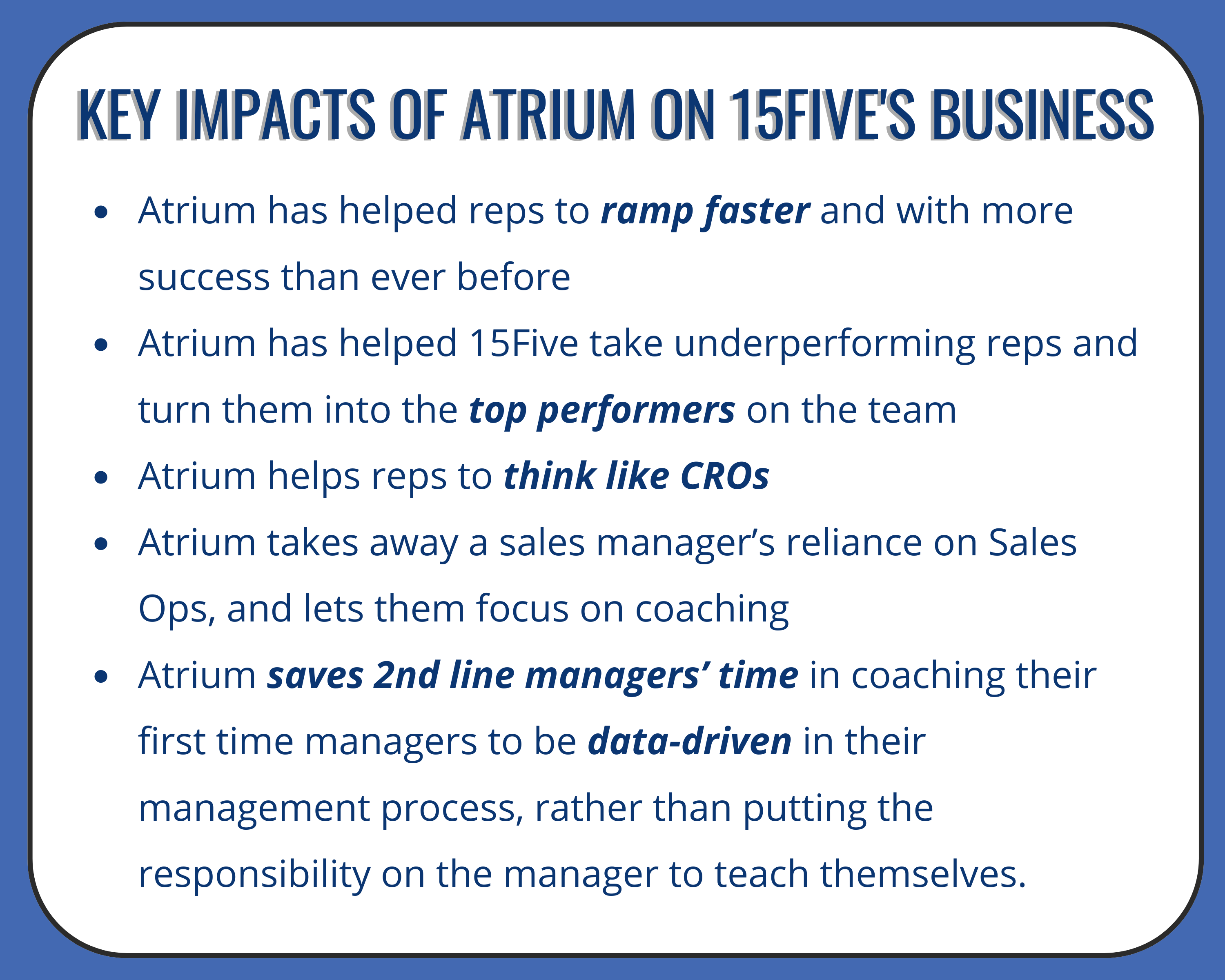 Use data to unlock the performance of your team.